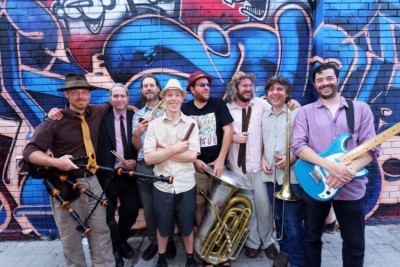 GUH is a band that has managed to defy conventions and categories for the length of their 28 year long bizarro career. The Toronto (and now Guelph and Belleville) collective has operated with a dedicated core group of musicians as well as a revolving door membership system since its beginning, acting as a place to roll around for the city’s more experimentally bent players. To narrow it down (ha!), their genre-bending songs have been described as being: jazz, rock, reggae, pop, latin, polka, bop, and “what-the ____ -was-that”? They call it GUH.