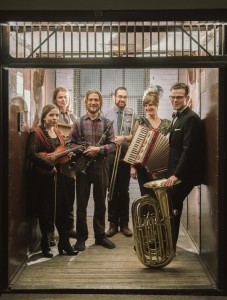 The Boxcar Boys create their distinct sound by weaving together a captivating bevy of folk traditions, Dixieland jazz and Klezmer. Their shows are joyous acoustic celebrations featuring six inimitable musicians on clarinet, tuba, fiddle, trombone, accordion and washboard. The band’s most recent album, ‘Cicada Ball’, was launched in 2015 to a sold out crowd at The Burdock Hall. The band supported the album with a successful tour of the East Coast and received national airplay on CBC and campus radio charts.