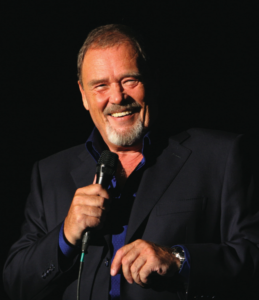 David Clayton-Thomas was inducted into the Canadian Music Hall of Fame in 1996. His jazz/rock composition ‘Spinning Wheel’ was enshrined in the Songwriter’s Hall of Fame in 2007. David received his star on Canada’s Walk of Fame in 2010. He has sold over 50 million records to date.

David’s debut album with Blood Sweat & Tears (BS&T) won an unprecedented five Grammy awards, including Album of the Year and Best Performance by A Male Vocalist. It featured three hit singles, ‘You Made Me So Very Happy’, ‘And When I Die’ and ‘Spinning Wheel’ as well as an irresistible rendition of Billie Holiday’s ‘God Bless the Child’ that became a signature song for David.

David continued to tour with BS&T until 2004 when he returned to his hometown of Toronto. He has released five critically acclaimed albums since returning to Canada. All are available worldwide on ILS/Universal.

His latest is ‘Canadiana’. It was conceived as a birthday present for Canada’s 150th. This 13 song album gives fresh new interpretations to songs by iconic Canadian songwriters, Lightfoot, Mitchell, Cohen, Neil Young and more. As we celebrate our county’s 150th birthday, I hope this album brings a glow of pride to every Canadian.