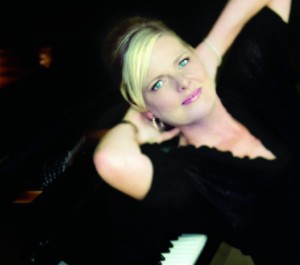 Internationally renowned singer/pianist Carol Welsman, originally hails from Toronto and is a 6-time Juno Award nominee. She will be performing in conjunction with her latest album FOR YOU a sampling of the 16 classic songs voted by her fans to appear on the recording via an exciting social media campaign. The album is officially released Sept. 1 2017 and marks her 12th recording.

Welsman comes from a musical family and is the granddaughter of Frank Welsman, founder and conductor of the Toronto Symphony and sister of composer John Welsman. She performs all over the world, records in English and French, Spanish and Italian, and speaks these languages fluently. In addition to her Juno nominations, her 2009 album, I Like Men: Reflections of Miss Peggy Lee, was voted Top 5 Album Pick of the Year in USA Today.

With Herbie Hancock she hosted the 2000 Billboard Jazz Awards and has been the subject of a documentary, The Language of Love, shot in Brazil, Italy and North America performing with special guests including Hancock, Djavan and composer/producer Romano Musumarra.